skip to main | skip to sidebar

Danger hiding in your refrigerator!

Just recently I was getting ready to cook some snapper we got at Meijer's. The fish was on a plate on the counter top which I thought was odd. Normally the package would be in the sink for the thawing process. I inquired about the different technique and was told that the label said to do it this way. I'm not usually a label or instruction reader so I had to find the package and read it. Sure enough it says to open the package before thawing but why? I thought it might have to do with the fish, snapper isn't our usual fish, walleye and salmon yes. Didn't know why until after supper when my son told me it has to do with Botulism!
Sure enough he pulled up a directive from his alma mater that explains the problem:

I find it hard to believe I haven't heard of something so dangerous, that I've been using so long, no news flashes not even from fake news outlets. Here in Wyandotte we get reports of people falling down and getting hurt in some rural area of Oregon but botulism forming in vacuum packaged fish goes under the radar. I can't believe the vacuum packaging PAC is keeping this information from getting to the public. However, food safety in this day and age is on the back burner while screaming and yelling political displays are front and center. What else is hiding in our homes? Hopefully we find out in time.

Bob Thiede of Wyandotte became the best deer hunter for the downriver area this past hunt season. There may be others with more points or bigger bodied deer but none can match the story and acclaim Bob has received.


Bob doesn't seem very excited but when things are happening fast like they did on opening morning I'm sure the adrenaline was flowing fast. The deer came from the wrong way, the sun was in his eyes and the reason for 2 shots needed, Bob was using open sights. It's hard to believe when things come together like this to become the hunt of a lifetime but when they do you have to feel very special. Then to top it off his buddy Todd Browning drove his truck right to where the deer was and threw it in the bed and drove Bob and his trophy to the Jerome Buck Pole in Jerome MI. Here they received much attention and then were invited to be on Big Buck Night for Michigan Out of Doors. Congrats Bob!

Get Outdoors Downriver.
Posted by River Rat at 3:51 PM No comments:

Dove, it's what's for breakfast

The hawk hit the jackpot this am. We've been seeing him hunting and catching sparrows in the bushes but today was bigger quarry. 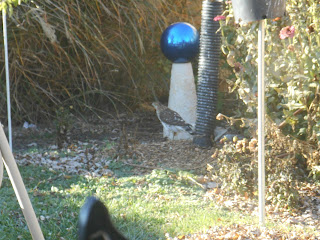 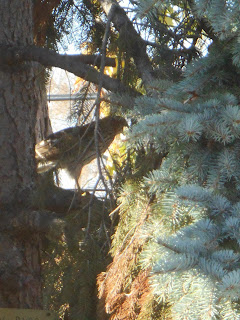 This one took him quite a while to devour.
I'm sure it wasn't this guy.

Now that the hawk is fed it's time for the praying mantis.
Posted by River Rat at 5:09 PM No comments:

Made the trek to the new Outdoor Adventure Center in Dtown. We had a really nice experience there. There is some construction going on but following the detour was easy. There's a free parking lot next to it for about 100 cars. after a short walk we were in. 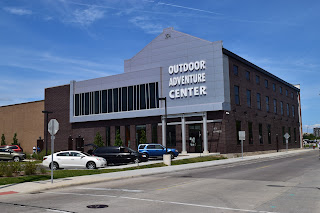 Admission is $5 for adults and $3 for kids. There are some vending machines but there's a large cafeteria type room to picnic in. The first displays are of MI's water sports. All very nice with a kayaking video in Wyandotte. 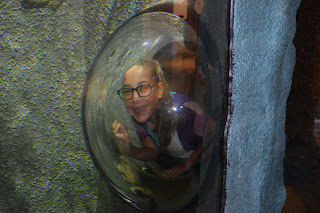 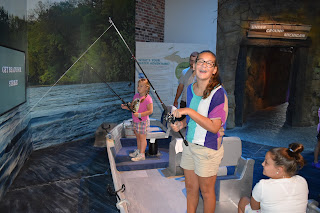 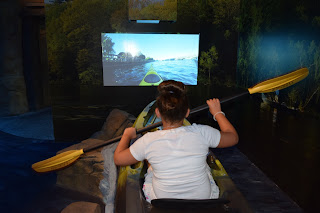 Then on to the great room with lots of info and waterfalls. 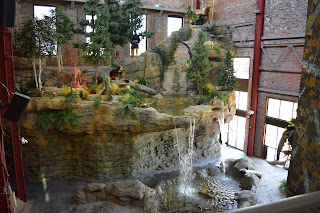 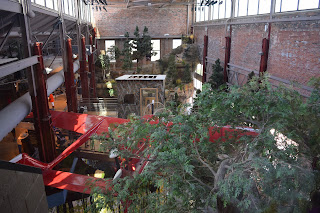 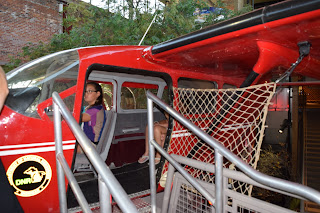 The second floor is for hunting and ski-do demo's. 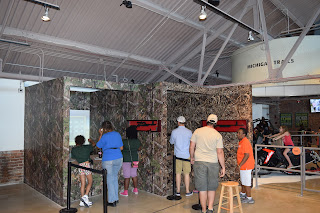 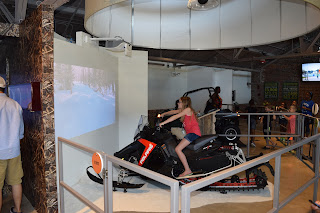 The third level gives you an idea what it's like to be an eagle. Try to flap the wings. 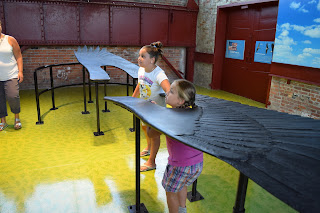 Across the street is Milliken State Park with a great view of the river and an ecology walk that leads to the Riverwalk and a free merry-go-round ride. 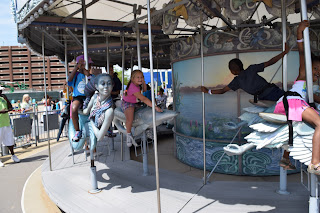 All in all a great day.

Get Outdoors Downriver.
Posted by River Rat at 5:21 PM No comments:

The Sky Is Falling

The old warning from a child's story. It just seems appropriate for the times we're in. First there are no walleye in the Detroit River, at least mid to upper. Been a long time since anyone can remember this. Soon the fall run will be here though.

Come fall though you won't be able to harvest a doe with bow and arrow in the UP. Oh those past winters were just terrible. The extra 1000 wolves that the land can support have nothing to do with it so we've heard. There are so many wolves that there are very few coyotes left, bad winter maybe. The kicker is that the beavers are down also, they live under the ice in winter so no excuse there. Now Minnesota is protecting their antlerless deer during bow season. Wisconsin is an other story.

Wisconsin's reaction to CWD in their state was to shoot as much as possible. All of their deer numbers are down and even the wolves aren't happy. Maybe peta is still giving them advice. Something really weird is going on there and I just hope we don't get any of their infected trout. This is a real pic and a mold that causes it.

Speaking of sky, I can remember as a young kid the uproar over the sputnik satellite. I was up way too late but I do remember seeing it pass over head. The space race was started then and eventually took us to the moon. Something my astrophysicist brother,  Roger, had been predicting when he was just a teen, much to the chagrin of family and friends. He knew then what we all know now, that when humans put their mind to it the impossible can happen. Now as a reminder to that feat you can look up to the sky and see the ISS, the International Space Station, at certain times and in clear skies. Go to http://spotthestation.nasa.gov/home.cfm and sign up for alerts for our area. You never know when you can see the living monument of the space race, international cooperation and human determination flying by. Hopefully other crazy thing happening now will meet some cooperation and balance out. 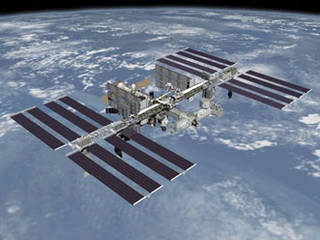 Get Outdoors Downriver
Posted by River Rat at 10:21 AM No comments:

Thru August at Oakwood Nature center the long boat canoe is taking tours of the Huron River. 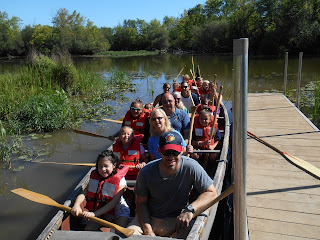 It's amazing what goes on that can't be seen from shore. 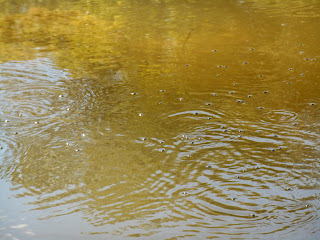 Or even deep into the aqua scape protected by impenetrable plant growth. 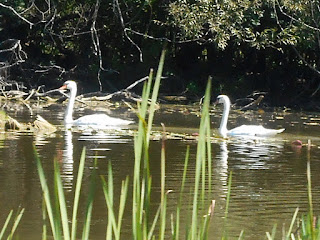 Then there's the friendly staff and critters at the center. 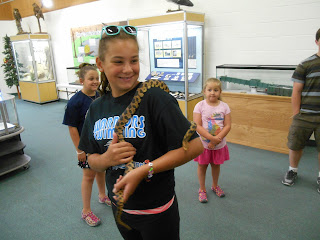 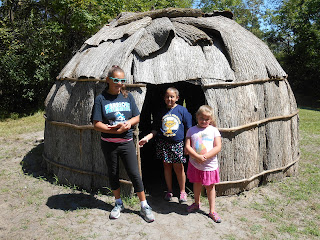 The Department of Natural Resources reminds hunters that the application period for antlerless deer licenses ends Aug. 15. Hunters may apply for one license in any open Deer Management Unit statewide; a nonrefundable $5 fee is charged at the time of application. Drawing results and leftover license availability may be viewed atwww.michigan.gov/huntdrawings beginning Sept. 2.
Hunters may apply for one private-land or public-land license online at E-License, or at any authorized license agent or DNR Customer Service Center. Young hunters, ages 9-16, also can purchase one junior antlerless deer license over the counter July 15-Aug. 15. No application is required. A 9-year-old must be 10 by Sept. 26 to purchase this license.


The 2015 antlerless deer license quotas for each DMU can be found atwww.michigan.gov/deer.

Hopefully your area has a quota.
Posted by River Rat at 5:21 PM No comments:

You have until June first @ 11:59pm to apply for hunting permits for bear or elk. Set an alarm so you don't forget. Here's the DNR's release. Hunters can apply online at www.mdnr-elicense.com, at any authorized license agent or at a DNR Customer Service Center. A nonrefundable $5 fee is charged at the time of application. Hunters may purchase just one bear and one elk application.
Applicants may call the DNR Wildlife Division at 517-284-WILD (9453) by June 1 for assistance with their application and may check their drawing results online at www.michigan.gov/huntdrawings beginning June 29 for both species. Also see the 2015 Michigan Elk Hunting Digest and 2015 Michigan Bear Hunting Digest for more details about the application processes. All hunting digests can be found online at www.michigan.gov/dnrdigests.
Applicants are responsible for submitting a valid application with the correct customer ID and application type. Make sure to check the receipt for accuracy and call the Wildlife Division immediately at 517-284-WILD (9453) if there are any mistakes.
Posted by River Rat at 12:34 PM No comments:

The Whip is retire from the worlds best motor plant but he just got a promotion to ranger at his new cart riding job. He was making the rounds the other day when someone flagged him down. There's a duck nest near the driving range, thankfully not down range. I'm not sure how ducks handle the nest building and egg laying but just like a virus in your computer it doesn't take much for things to go wrong. 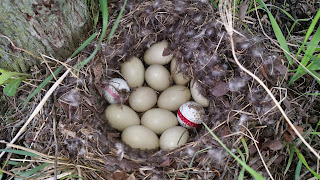 Don't put all your eggs in one basket but make sure they're all eggs!

Get Outdoors Downriver
Posted by River Rat at 1:55 PM No comments:

Spring has smashed on the Detroit River. Not pumpkins but many 12 to 14 pound walleye.

Spring usually springs with plants emerging from their winter sleep. Not this year on the Detroit River where Spring has smashed all expectations about walleye fishing. The Coast Guard estimates over 1000 boats were plying the waters of the Detroit River last Saturday. No one could have expected the turnout that happened. All launches were backed up and words couldn't begin to describe the scene. In Wyandotte boats were backed up from the river to Biddle, to Goddard and south almost to Northline. A four hour wait to get to chase the walters and some were doing it.

Who can blame them when so many 12 - 14 lbers were being caught. Eight pound walleye considered trophies in many regions are put in coolers like nothing to cheer about. If you don't believe me call one of the bait shops on my Bait Shop link and they'll tell you all about it. It's one of those bazaar things that send grown men into a damn the torpedoes attitude to catch the fish of a lifetime.

With all the extra boats out there many were trying different spots to try and some were productive. With all of the boats out there it can hamper the walleye bite so when changing position back to the head of the drift a stealth mode is important, no wake speed. Some boats don't even take the trolling motor out of the water, not recommended. Yes a trolling motor is needed to stay in an optimal drift be it current or wind trying to get you off course. You want that jig to be directly below the boat for more hook ups.


Here's a new catch I haven't heard of in many years. Smelt. Steelhead and salmon are caught fairly regular now but smelt? Hopefully they're on a comeback and dipping will be available.

Remember to be careful on the cold water and Get Outdoors Downriver.

To Do Downriver Outdoors